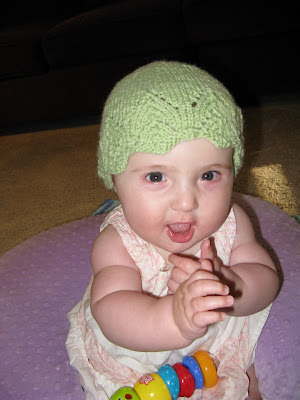 ...and making lots and lots of progress! Why, there has even been knitting, as you see Missy A modeling her latest Pea Pod Cap. No, that's not the real name of the pattern--it's from a book called Little Sweet Peas, from Sirdar, and the patterns aren't named. Just called "cardigan and cap" and other equally descriptive names.
Whatever.

It's a very cute hat, and I even did my own modification to the pattern: I knit it on circs instead of flat, as the pattern is written.

I'm going to make the matching cardi, and I will probably meddle with that pattern too. It's one of those gems t hat calls for you to cast on a certain number of stitches, knit the bottom few and then put the front band stitches on a holder.

You then knit up these 3 stitches in garter stitch, and sew them onto the fronts.

Been there. Done that. 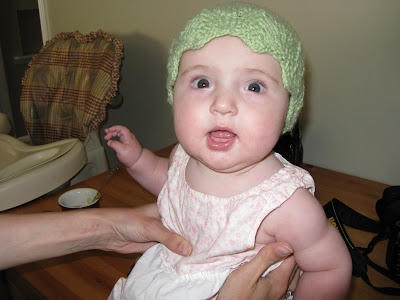 Thought it was a royal pain, and don't do that any more. 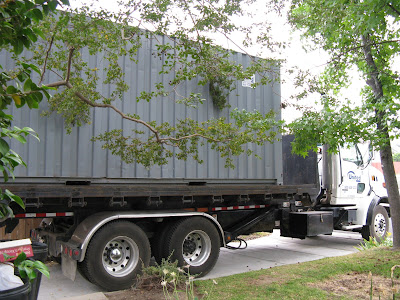 Not on a baby sweater that won't get a whole lot of wearing, but will get a lot of washing!

The bins are gone.

Bye-bye, bins. Also bye-bye to the huge pile of construction debris and trash.

Here's the gross part. When they moved the bins, there was a great deal of scuttling in the trash pile. Ewww!

Well, it's gone now, and I hope the critters have found a new home.

I had a good crew to hang my new light fixtures: 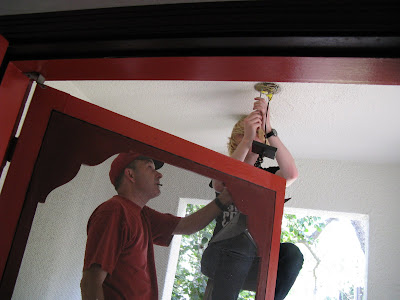 Son Jeff and his son, John.


This is how the light fixture looks in place. 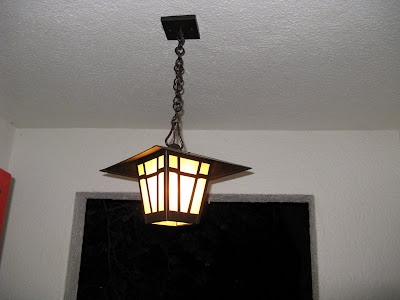 Then there was today's adventure. A blowout, on the top of Kellogg Hill, which any of you in SoCal 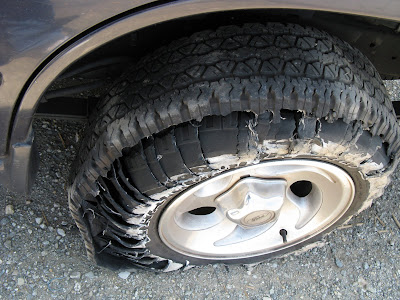 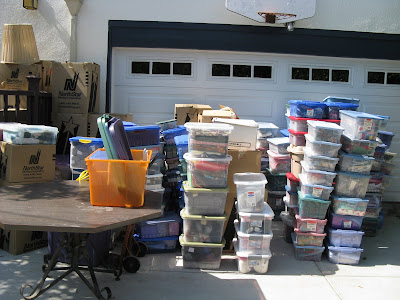 will realize is the best spot in the world NOT to have a blowout. Thank heaven for the Metro Freeway Patrol, is all I can say. Now I need to buy a new tire.


This is the last of the boxes and bins that aren't under cover yet. It's amazing to me that we could have had all this in the house, plus the 6 or 7 Explorer-loads that went to Goodwill and the giant truckload that preceded it.

Oh, and the furniture that was put on the porch with a "free furniture" sign. Had some interesting pieces, plus a bunch of bookcases, but they got the heave-ho. Trying to make room. The table in this picture is going to be in my workroom. It makes a great cutting table! 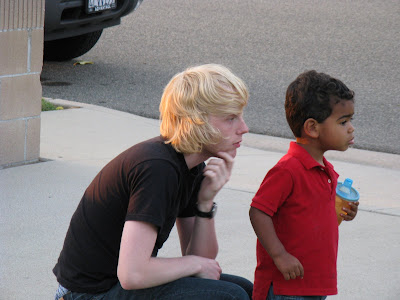 Cousins John and Garrett had a great time this evening, playing at Auntie D5's. Not that I'm prejudiced or anything, but I do think they are very handsome young men! 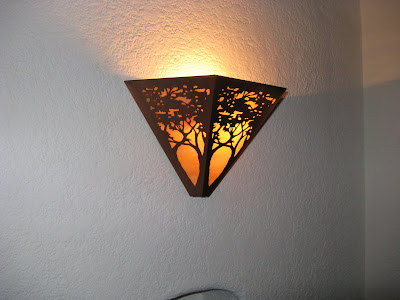 New sconce for the dining room. I just love this fixture, which is a smaller variation on the "big" chandelier in the same room.

A homage to our gone-but-not-forgotten oak tree. There's a "picture tile" set into the front of the fireplace surround that also features a large tree--since the house was built in 1920, and the oak tree was at least 150 years old, I'm sure it was there when the house was built and that's why the tile was chosen. So I'm just carrying the theme along. 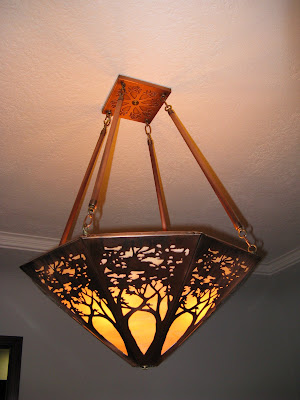 It's from a local artisan, James Mattson. We have a wonderful shop in Old Town Monrovia, called Historic Lighting, which has the most wonderful Craftsman pieces--not just lights, but furniture and rugs as well.

So that's part of what's been going on. I've been roundly scolded for neglecting the blog, hence the update. My only excuse (besides being overwhelmed and extremely tired!) is that I've been deprived of internet access. Now, thanks to John, I have my computer back, and our network is again up and running so no more excuses. Besides, this weekend is Missy A's baptism and that ought to provide some great pictures. Hmmm... wonder if Jeff brought his suit??

And what will Memere wear? My clothes are almost all still in boxes. Time to shut down the computer and go unpack!

After a good night's rest!
Posted by mehitabel at 11:15 PM 8 comments: