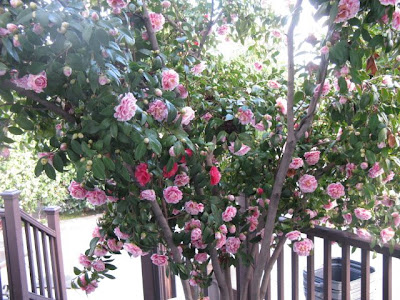 The contrast between the weather out here and in other parts of the country is pretty amazing.
This is the view out of my back door: camellia bush in full bloom. It dawned on me, when I was passing out camellia food to the 20+ bushes that are growing around the house, that this one has done pretty well in its odd little enclosure.
When we started the addition to this house--back in 1983, if you'd like to keep track--we had two camellia bushes growing side by side just outside the kitchen door. Because of the way the house is oriented, the stairs to the yard went away from the bushes; but it soon became obvious that one or both of them was going to need to be moved so that there'd be room for a back door and a deck. So one of the bushes got moved, but the other we decided to leave in place. The deck was actually built around the bush; and when the deck was replaced, the new deck had a cutout for the camellia as well. I tend to think of this as an in-process arrangement, but after 25 years, I guess it's safe to say the camellia is pretty content in its spot. 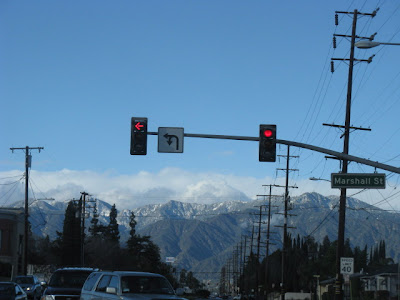 Then there's the snow on the mountains from the recent rains. The clouds sort of obscure it in this picture, but hey, when you're sitting at a red light trying to take a quick photo, this is what you get.
It's no secret that I love snow, and rain, and cold weather, and while I have really enjoyed our recent storms, they've now passed into history and I'm once again dealing with bright hot sunny days. I hope we get more rain soon. 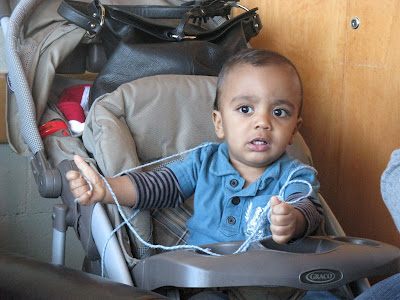 Today was a knitting day, and we had a little visitor.
You can never start a boy off too early with the yarn love.
I'm not sure what you'd call this particular technique. Yarn sampling?
He also enjoyed petting people's sweaters, especially the Yarn Addict who was sitting right next to him.
She also had a couple of skeins of Sundara yarn that he would have loved to get his hands on, but he had to settle for the leftovers of Memere's Encore. 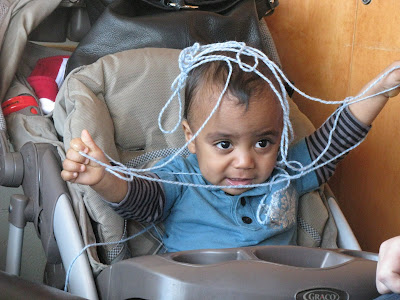 Oh well. He had fun with it! And he was a very good little knit-visitor.
His momma could have done some knitting, if she had a project in the works. We're working on her! She does know how to knit and crochet both--and when we took our infamous tatting class, in San Diego, she was the only one of us who could actually produce a respectable piece of tatting. That is my biggest regret, that I have never been able to master the art of the shuttle.

My mother did beautiful tatting, though, and we have some of her lace. Heirloom stuff! 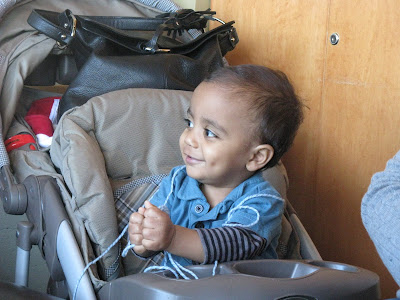 This grandma, however, does much more utilitarian knitting most of the time. I think it's almost time to tackle one of my silk shawl projects.
Hmmm. A silk shawl would be the perfect accessory for the Grandmother-of-the-Bride, n'est-ce-pas? I'll have to see what I can do about that.