Getting Out of the House 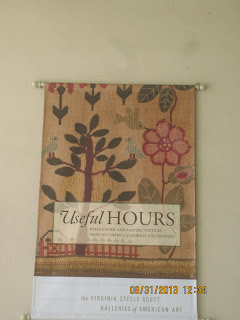 Today was the first Open House since the house was listed for sale. Since the worst thing to have at an open house is the owner, I decided to take myself out for a while.

Warning: there is no quilting or knitting content. The closest thing is the poster over there <-- a="" for="" href="http://huntington.org/huntingtonlibrary_02.aspx?id=11540" target="_blank" the="">needlework exhibit
I wanted to see. Sadly, they did not allow photography in the exhibit, so I can't share the wonderments with you.
I've always had a particular love for old schoolgirl samplers. At one point I had a pretty good collection of Scarlet Letter kits for making reproductions, and fully intended to work them. Well, we know how that goes.

It was a great experience to view this exhibit today. Not only was it a cool and pleasant oasis on a particularly steamy day, I was apparently the only person who wanted to see it. I had the whole (small) room to myself. Well, except for the guard, who looked pretty bored but might have gotten unhappy if I'd taken my camera out. Only a few samplers, but really nice ones, and I was able to get right up to the glass on their frames to examine the stitching. Extremely fine work, mostly silk on linen, and not a nice evenweave linen of the kind we can get nowadays. 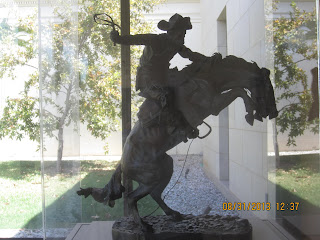 Of course I did some more wandering around the gallery. There's a north wall with a sheer expanse of windows and some bronze sculptures displayed in front of them.

This one's a Remington, and even though it's smaller than many I've seen, it's got that wonderful energy and movement that comes to life while you gaze at it. 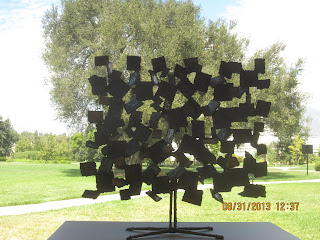 This one's  quite a bit more modern. To me it looks like a tree, almost an echo of the large trees visible outside the window.

I could have read the  little information card, but I decided I liked my own interpretation of it.

Every so often I get in this mood: don't confuse me with facts, my mind is made up. Luckily it's usually about something relatively unimportant, like whether this is meant to be a tree or if it has some deeper, more existential meaning. 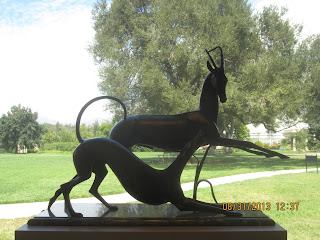 Antelope and Hound. Graceful figures and again, I don't really want to know if they are hunter and hunted. I like to think that they are kindred spirits, gamboling and playing.

There are a couple of paintings in the wing of the gallery that seem to echo this same pairing of hound and antelope, dog and deer. Maybe a little research for another day. 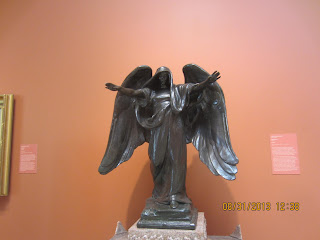 This piece is called Benediction. I think I take pictures of her every time I'm in this gallery. I realized, after I'd snapped this one, that she's a favorite of mine.

By the way, these photos were all taken at the Virginia Steele Scott Gallery at The Huntington.

Their newest exhibit examines the legacy and history of the mission era in California history. Included with the maps, artifacts, photos and displays, are some contemporary pieces and some "rewriting" of the old idyllic visions of the time. Built around the iconic form of Junipero Serra, the exhibit examines the man and his works and legacies. I will probably go back to see this again, as there was much food for thought in the presentation.

I should add that a lot of it feels very personal to me, since I've had a San Gabriel mailing address for most of my years in California. The San Gabriel Mission has been our parish church, it's where my children were baptized and confirmed and some of them even married there. The old Mission Playhouse was the first job for most of them, too. It's been over 50 years for me, living here, and I am fascinated by the history of this place. 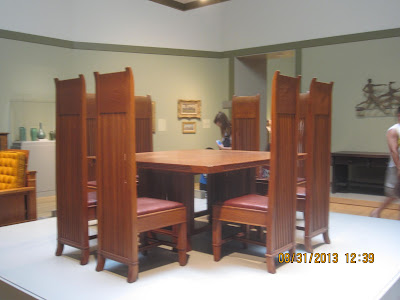 The Scott Gallery has a nice wing of A&C furnishings, including this dining room ensemble by Frank Lloyd Wright.

There's an entire room dedicated to the Gamble House. I was reminded once again that I need to pay another visit to that spectacular place.

So many wonderments, so little time to see and experience them all! 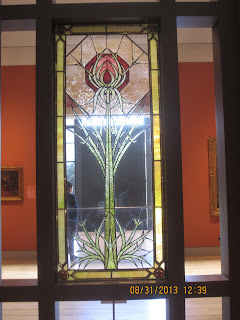 Stained glass window in a very art-nouveau style. I can see this as a quilt.

Reminds me that I have a FLW window quilt in progress in one of those tubs that's either in the garage or in the storage unit. I need to get it out and finish it.

I did finish one piece that I had started in that Asilomar class so many years ago--in fact, I finished it in about 3 days of the session, and then started the more ambitious piece. I'm thinking that might become a blog post all its own, once I get settled in and can start quilting again! 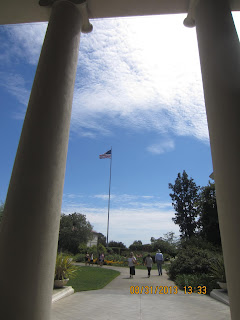 It's been one of those days--well, weeks really--when we have lots of clouds and the humidity ratchets up to east-coast levels.

But they do make for a pretty sky.

This is the view looking south from the portico of the Scott gallery. On a clear day, you could probably see Catalina from here. Back in the days when the Huntingtons lived here, they had a view to the south of rolling hills and a lake.

The lake has long since disappeared, but there are traces of it if you know where to look. It's how Lake Avenue got its name (Lake Ave. is the premier shopping section of Pasadena, home of posh shops and proper ladies back in the day). The old lake bed is now Lacy Park, in San Marino. 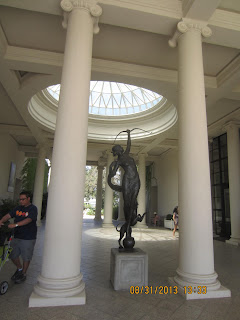 After I took the picture above, I turned around and this is the view looking north from the same spot.

Diana the huntress--and her hound.  Hmmm, there were a few hounds in today's visit.

The last couple of pictures were both taken facing north toward the mountains, though the greenery hides them. One of my firends commented on Facebook today that the sky was showing every possible variation of cloud--and I believe her.

The only thing we didn't have was rain clouds... 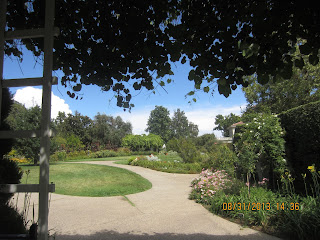 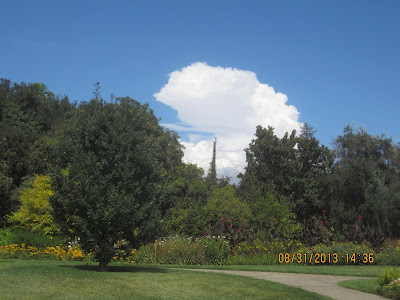 Posted by mehitabel at 9:01 PM No comments:

The Pinwheels Are Packed Up

Deciding to move was not as spontaneous a decision as it may have seemed at first, really. It's something that's been in "the plan" for a long time.

However, it did kind of all hinge on finding the right place to move to, so when I was pretty sure I'd found the "right place" it made sense to jump on it!
But getting this house ready to show has been a hugkie endeavor.

Well, it is a huge house. Luckily for me, I have some very energetic and dedicated daughters, who have not stinted in providing backbone and muscle-power too! Not to mention the sons-in-law  who've assisted with the schlepping and the shoving and taken over kid duties and all kinds of other things to let this happen. I am truly blessed with a most amazing family. Even the long distance people have helped in many ways.

Now it's done and the house is listed. Photos taken tomorrow for ads and the broker's office will caravan on Wed. First Open House next weekend.

So it's quite unreal to be living in this showplace!

Let's look at a couple of quilts, shall we? Just because my machines are packed up and stored in the garage, there are other people who can still sew, and do! These are all Anne's--we had talked about making Log Cabin quilts, and while mine is still languishing, she's finished two tops! 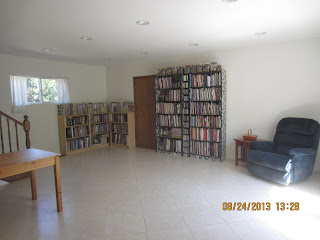 The Thanksgiving quilt is going to hang in the dining room at her community. It's going to be smashing--I do love that panel with the saltbox houses. Reminds me of Deerfield and other towns back East.

Just a few peeks at the house if you're interested.

Lots more pictures on Flickr, including some before and during shots that seriously look as if they came from Hoarders.

Why of course I'm not a hoarder. 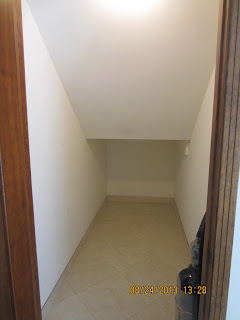 This is my "Harry Potter" closet under the stairs. It really would be big enough to stash a bed and a couple of other pieces in, should I happen to have a little boy I wanted to hide.

Or one who wanted to hide from me.

This has generally been pretty full and is one of Shyla's favorite hidey-holes.

Well, it was till we took all her boxes and hiding spots away.

One thing that's missing from all these pictures is my cats. They've had to go to "summer camp" to get away from all the fuss around here. The theory is that the house will show better without cat boxes and cat accoutrements all over the place, not to mention cat barf surprises and floating cat hair. 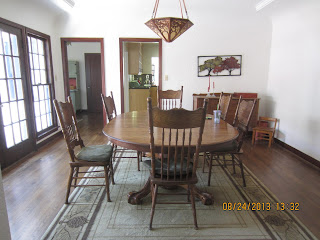 I agree. But I still miss my babies!

Oh well. I have to admit the house looks terrific.

All that work is about to pay off, or at least we hope so!

Anybody want to buy a big old house? 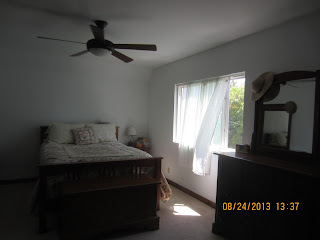 So, there shall be knitting, because it's easy to hide at a minute's notice and portable.

Besides, I have a couple of UFOs that could use some work, so might as well do that.

Oh, and reading.  That doesn't make a mess either!
Posted by mehitabel at 8:43 PM 2 comments: