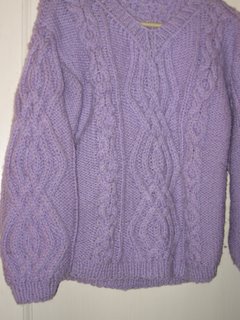 Since I didn't get to SnB on Wed this week, I was feeling a little "deprived" of things to post. Lo and behold, I've had this sweater hanging in the doorway to my "computer room" for quite a while now, so I thought I'd share it. It's my own design, done in chunky lavender yarn umpteen years ago--the lavender is the tipoff, since that's D2's* color. But it was worn a lot by D5*, too, who really really loved it. It's now getting ready to go to Colorado to live with the darling granddaughters--I've been putting off sending it, since there are 2 of them and only one sweater. My innate sense of fair play says there should be 2 sweaters, and I know I have more in the closet-cave. Anyway, those are x-o cables and a kind of interlaced cable--it's not the greatest picture, but I love how the center cable unravels to edge the ribbing on the V neck. Damn, I used to do good work!
* Much as I hate referring to my children by numbers, it's occurred to me that it's much easier (and probably internet-safer) to do so. Therefore D2 will refer to my second daughter, D5 to my youngest, etc. They do have names, rather nice ones I think, and I'll probably toss them around a bit too, but for the most part I think I'll stick with the numbers. My second son usually refers to himself as "#2" and his brother was The Big A. Yes, the two boys were the oldest, followed by the five daughters. Now all but one of them are married and the four oldest all moved away from "here." 'Nuff history for you? I thought so.
Hey, at least there was something fibery here today! Considering the heat and my general degree of wilt, that's a major victory!
Posted by mehitabel at 9:52 AM 5 comments: 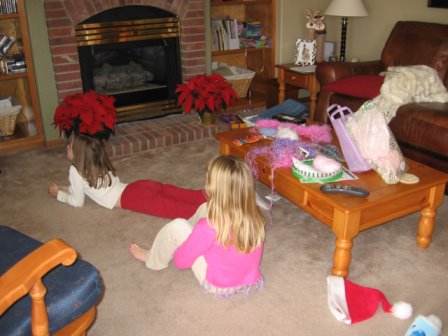 Obviously not the most recent picture, but oh well. These are my Colorado granddaughters, and I took this pic when I was there visiting them in December '05. They both wanted to learn to knit so I got them yarn, needles, a set of knitting circles and a kids' knitting machine. They really took to all of it, as you can see from the pile on the coffee table. What brought this up is that I was talking to their mom last night, and she said they'd spent the afternoon in the living room, pillows piled all around them, knitting up a storm. I'm glad to see it wasn't just a passing fad! By the way, the white "pile" on the sofa is a cream-colored AbFab--their mom (my oldest daughter) loves white-on-white quilts so this was a natural (!) choice for her. Thanks to the great prices I found on eBay, the AbFab kits were pretty reasonable and I'm currently working on my seventh one. They were great "hospital knitting" and I got a lot done on them when Bob was either in the hospital, or at the dr's getting chemo, or just when we'd be sitting around the house. I think he really liked it when I would sit and knit, and I know that there were a lot of times--especially when he was in the ICU--when I could stick around and knit quietly, and not be banished to the waiting room. The knitting was my "twitch" so I could sit still and be calm.
Posted by mehitabel at 9:26 AM No comments: