Thanksgiving is a good time to catch up on my blogging--there are many many things I'm thankful for this year!
First of all, to explain the hiatus, I have to give you a bit of an "organ recital" but I promise to keep it short and simple. You may or may not know that back in 2011, I had to have spine surgery. It was successful, and I've been mostly able to go back to my "usual" life--which included a massive effort on the part of my family and friends to get my old family house sold and get me moved into a nice new one-story place that's closer to some of the girls and pretty easy for the third one to get to--unless, like yesterday, the freeway and surrounding surface streets are all clogged up! 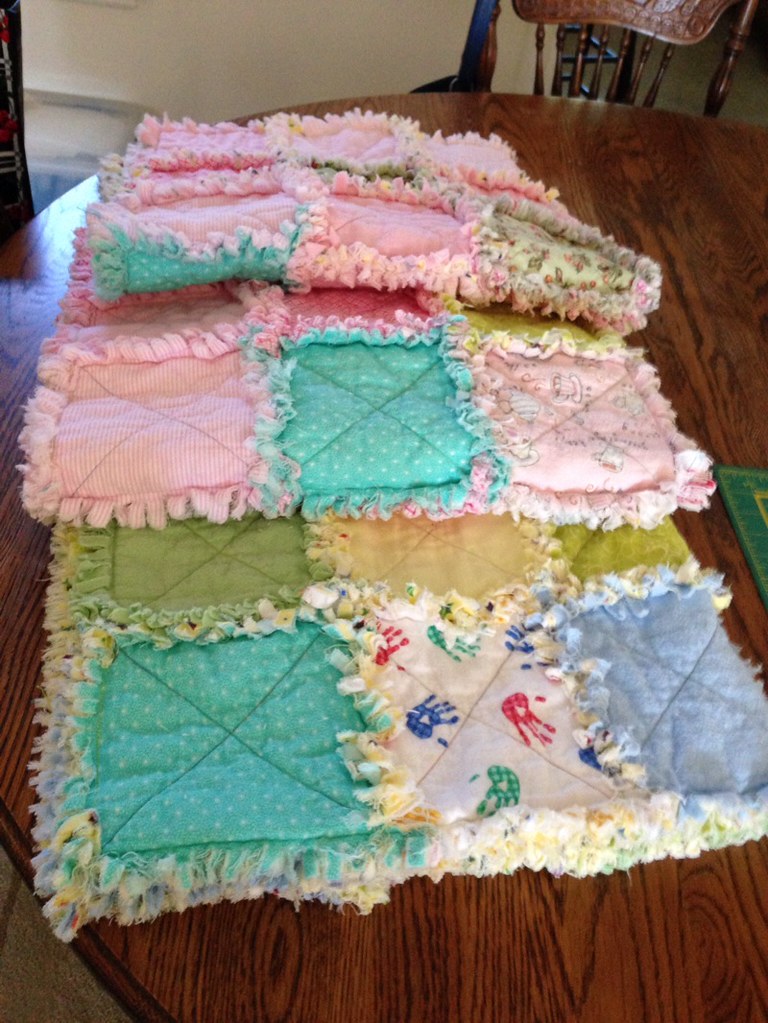 Anyway, I've had a recurrence of back issues, mainly a herniated disk that had even the ortho docs widening their eyes and saying my, that's a big one! So three weeks ago, I had surgery to have it repaired. I now have a double row of rods marching up my back holding up my lumbar vertebrae, and some very neat and tidy scars. Well, the newest one is still healing, but it's very neat and tidy!


Fortunately, while waiting for the surgery, thanks to a lot of steroids, I was able to get a few things done. I made 6 baby ragg quilts--the three shown were for online friends for whom we did a secret online baby shower. I also made two more for my two new great-grandsons, one of whom is in New Orleans and the other's in Las Vegas. The sixth one was a little different: it was woodsy prints in browns and greens with lots of forest critters, and it went to my granddaughter's mother-in-law, in Conn. I also sent two other quilts to the baby shower: a Many Trips Around the World that Alyssa had picked out for her baby, and a Trip Around the World in a darling Noah's Ark print with browns, blues, and reds, for my son and his wife to have at their house. That way baby Cora can have a quilt everywhere! (Baby is due in January.) 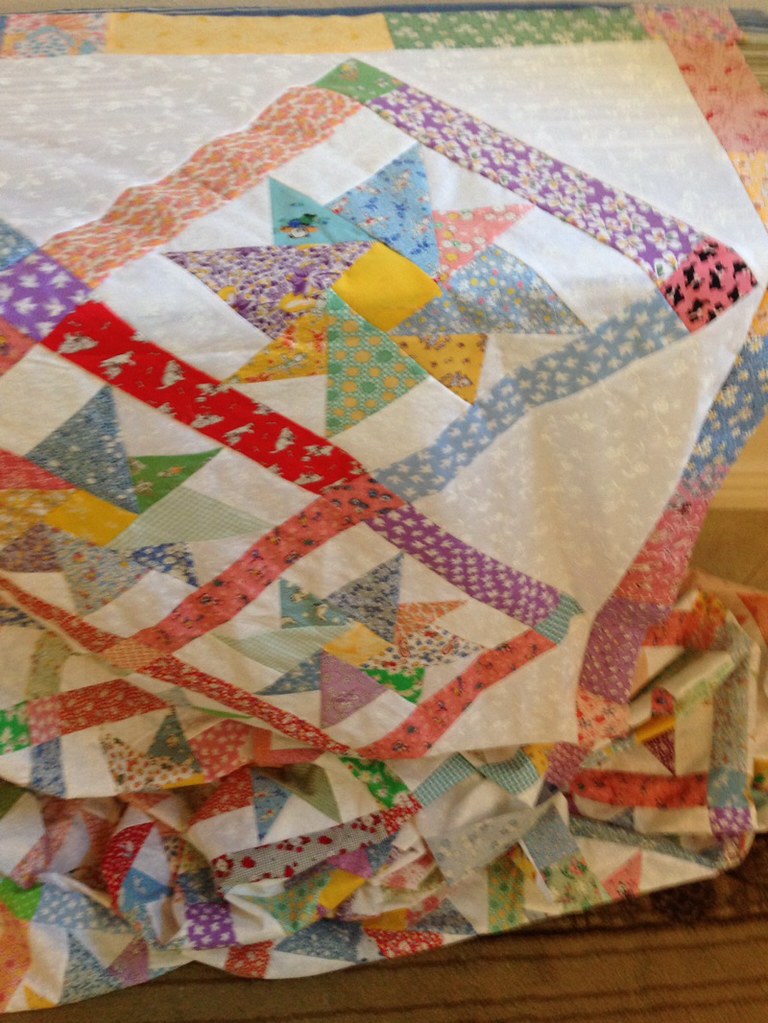 I was also able to get the last four pinwheel quilts bordered and sent off to the longarmers. 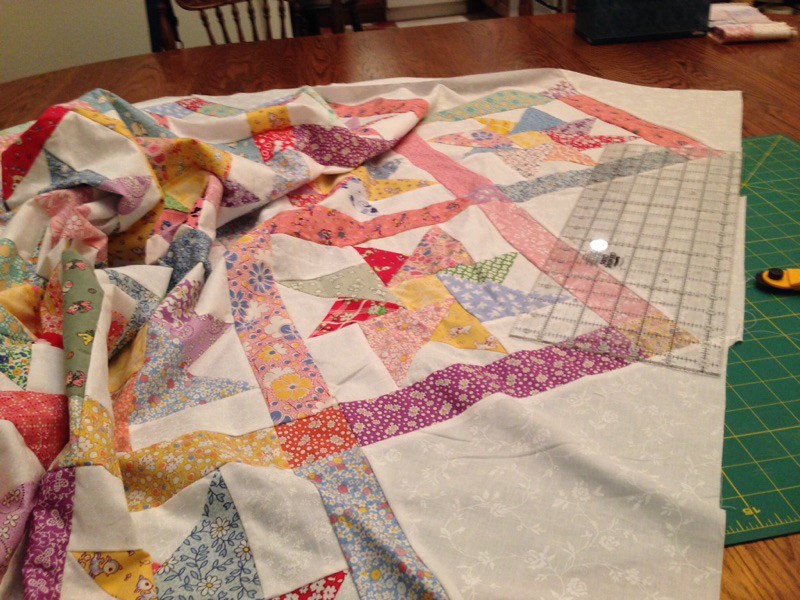 Then I got the bindings sewn onto the first two, and onto the Millennium Star quilt.

I've even started sewing that binding down. The back and binding are batik, so it's slow going. I love the weight and texture of batik, but it takes some effort to sew through. 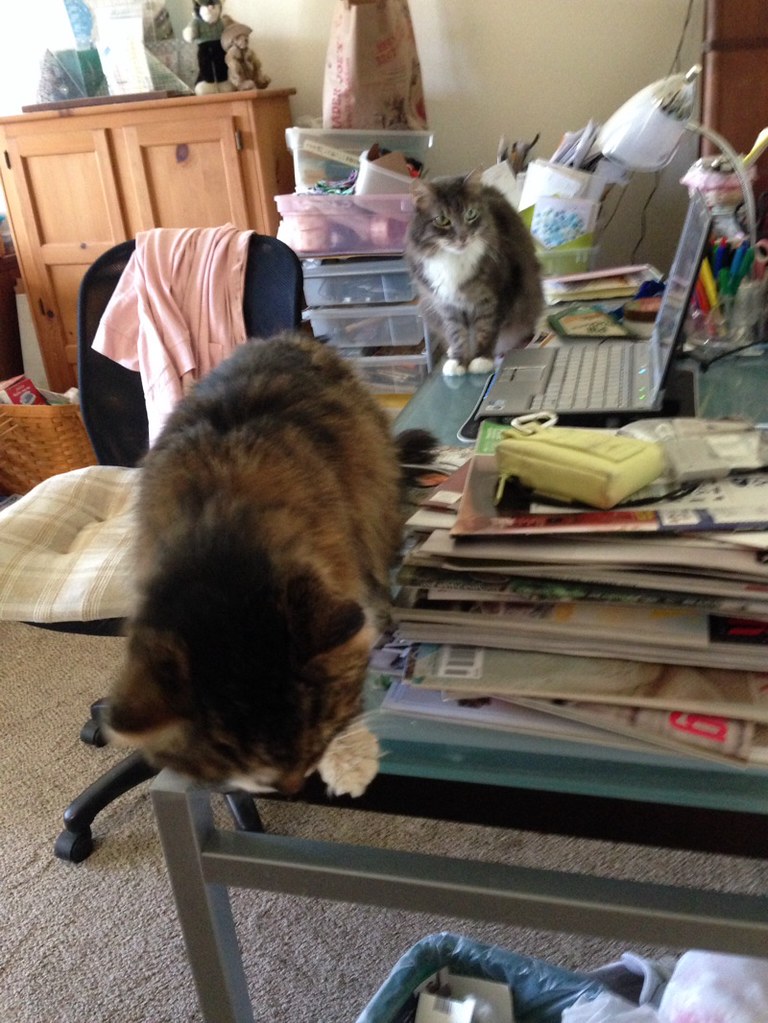 On the furry friends front (say that six time fast!) we seem to have some detente. Here they are both on top of the desk. Luckily I have two hands so I can pet two cats at once. There really is a lot less hostiility these days, which I'm very happy about! 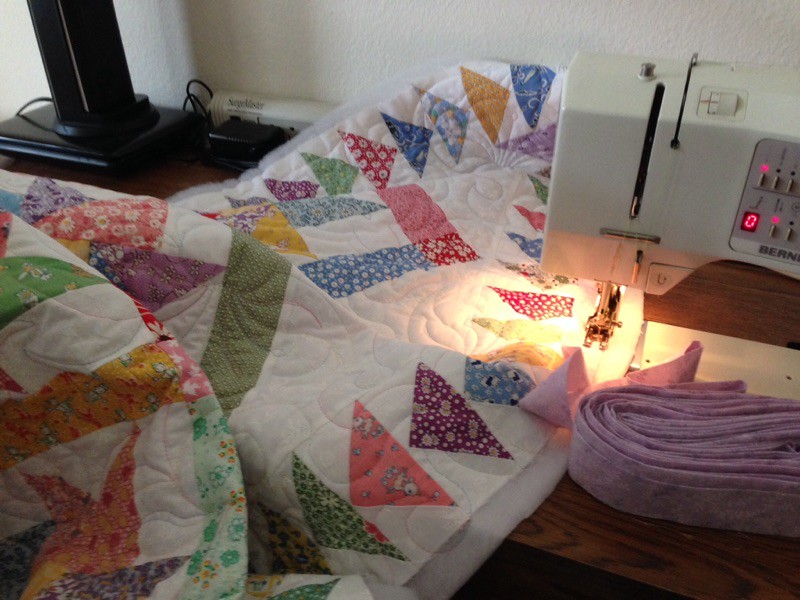 Since this was - Posted using BlogPress from my iPad - I can only upload 5 pictures at a time. I really need to find a good way to manage posting now that I take more pictures with my phone than with the camera! The phone syncs with the iPad, which is convenient... but I prefer typing on the laptop, which unfortunately is on its last legs. Among the several things queuing up for when I'm mobile and healthy again, getting a new computer is right up at the top of the list. So's getting new glasses!

I hope you all had a lovely Thanksgiving with lots of food, fun, friends, family, and whatever makes your heart glad! For now, well, I'm baa-ack!
Posted by mehitabel at 1:51 PM No comments: