Can't believe it's been a week since I last posted. I guess just "thinking" a post doesn't put it on the page...who knew? 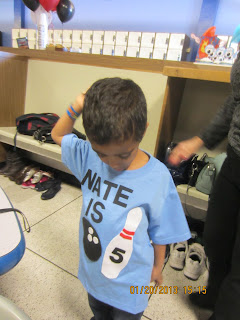 There have been distractions, like a birthday party for N8. As you can tell from his picture, he's 5.

He's a pretty good bowler--a whole lot better at it than his memere, that's for sure.

Sorry these are pretty poor pictures of them all...hard to get a good picture of a blur. That's mainly why there are no pictures of Garrett here--he literally wasn't still long enough for me to snap a picture! 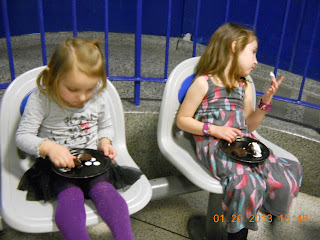 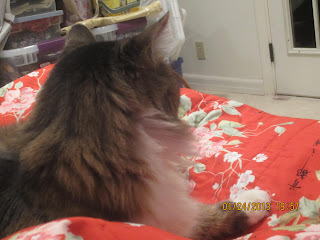 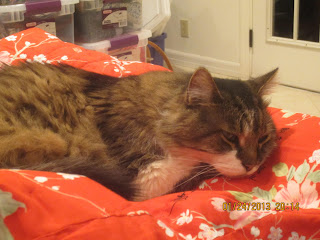 Trying to quilt is always a bit of an adventure when there's a cat around. This particular quilt seems to be a cat magnet.


This is one I really want to get finished up. Would dearly love to have at least one finished quilt by the end of the month. You know, something to make that UFO list over there look a little less intimidating.

As well as making the finished list look a lot less lonely.

If you ever need a quilt weight (you know, one of those things like a paperweight, only large and fuzzy and good for holding down quilts to make them harder to work on) he's  your boy. 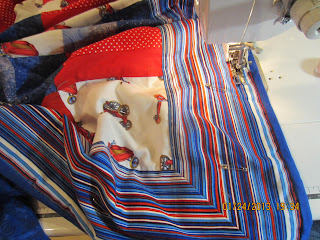 The deception here is that while HiHi was helping with the red-backed quilt, I was actually working on the blue-backed one.

Quilted the stripes into the mitered border. Went around it three times, then started doing some diagonals through the blocks. Not sure what's in this one, but it "feels" flimsy. So I wanted to give it some extra quilting to make sure it stays together. 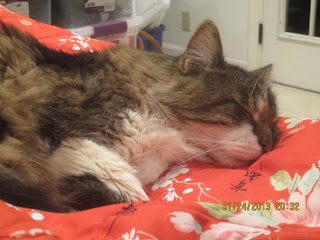 Massive boredom has set it. The soundtrack to this picture would read along the lines of "purrr....zzzz...purrr... snore...purr..." 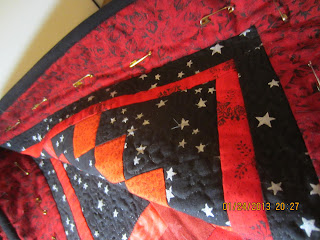 On to slightly more interesting things. I did finish sewing down the binding on the red and black stars quilt. I had thought it only needed binding...

oh no. As I was sewing binding, I realized that I had been stippling in the black areas, and was about half done.

This is the back of the quilt--lobsters and clams and other accoutrements of a real old-fashioned clambake. Makes me salivate just looking at it.

Couple of close-ups of the quilting. Looks to me like smoke-colored invisible on the front, and a red/black/yellow Sulky on the back. 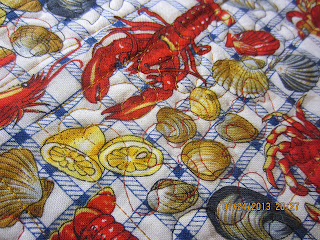 Oh joy--imagine trying to match thread from 10 years ago. Yes, I estimate this is at least t hat old--probably even older.

Guess what. There are a few advantages to being a packrat. I found two bobbins wound with this thread. I think it will be quilted on the Bernina, since there's no point in trying to rewind bobbins. Besides which, the Brother seems to have a little "hangup" using invisible thread.

See that picture of the blue back? That's not the worst part of the quilting. It puckered. It looked awful.
It hadn't looked that bad when I was doing it, and I found that if I put a little tension on it, it would smooth out. Apparently that was what happened when I was quilting it, and once it had a chance to relax overnight, it puckered. 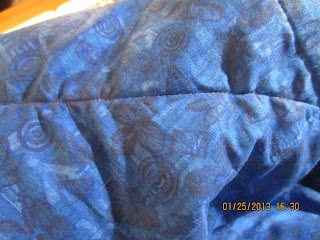 Cue a Friday night with a marathon of mind-candy TV and some quality time with Jack (the ripper--doesn't everyone name their tools?) taking out all the nasty puckery stuff.

The up side is that I did some test quilting using cotton thread on the top as well as on the bottom, and it doesn't pucker. So, this quilt is going to have red-white-and-blue quilting on both sides.

The red-backed quilt looks fine. I'm not sure exactly what happened with the blue one, but I'm not going to worry about it. I have a solution to the problem, and it's going to get DONE.

Have you met Shyla yet? She loves this quilt too.

She's been getting much friendlier lately with me. Not so much with HiHi, but at least she's not spending all her time hiding in the bathroom cabinet.

When I was doing all that ripping, a good part of the time she was curled up next to me in the chair. If I moved my elbow, she'd rub her head on it. She really does want to be a pet, and I'm glad to see it happening.

Now if she'll just stop growling and  hissing at HiHi. After all, he was here first!

I am lucky enough to live near the Norton Simon Museum.
If you watch the New Year's Day Tournament of Roses Parade, you've probably seen it, adorned with a gigantic rose on its front--it's right at the corner of Orange Grove and Colorado Blvds, where the floats and bands and other participants join up to start the parade.
It's home to a bronze version of Degas' Little Dancer Age Fourteen. Today the museum hosted a talk about the statue, featuring lots of pictures of sketches Degas made for the statue, and an analysis of his working methods.
Very interesting! I'm currently reading The Art Forger by B.A. Shapiro, which involves a Degas masterpiece--one of the ones stolen from the Gardner several years back. Lots of analysis of Degas' methods in the book--I am assuming the information is pretty factual, even though the story itself is fiction.  I love that sort of thing. One of my favorite books is The Poet and the Murderer, by Simon Worrall, about the master forger who not only created a new/fake Emily Dickinson poem which was good enough to fool experts, but also a whole lot of Mormon documents.

I may have to get that out and re-read it for the umpteenth time.  Also the other books on art forgery I have.

For now, there are baked potatoes beeping at me.


Posted by mehitabel at 9:05 PM No comments: