Sorry, too good a title to resist! The view from this hotel is not spectacular...we'll see what happens when the fog burns off. There are mountains in this picture, believe it or not, just hidden behind that brownish-gray curtain. 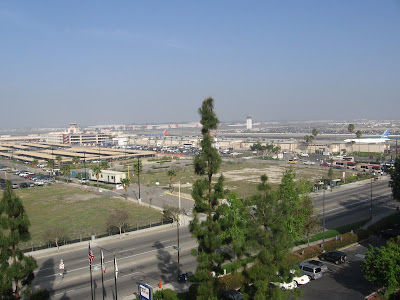 I'm here for a quilt show, one of the larger ones in the area. I'm off to the show now and will probably post some pictures, if the Quilt Police don't take my camera away! (Just kidding, their stated policy is that pictures are ok and can even be posted as long as properly credited.)

I cast on for the Central Park Hoodie last night, but no pics yet--4 rows of ribbing is not exciting. So far, the Durango is nice to work with, feels soft and cushy and the fabric is looking good. I love the color--Dim Sum Mary used it to make her Wicked--and I think it will make a really nice sweater. It's going to come to the quilt show with me, in case I feel the need to sit and knit and rest the feet for a bit!

Ever have one of those experiences when suddenly the whole house shakes and there's hideous noises coming from over your head? That's what happened to me today. I didn't remember till I went out to see what was going on that today was the day the roofers were coming. 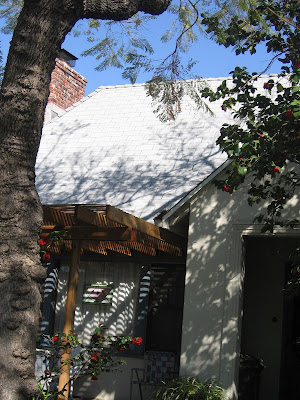 They did a lot of repair work, all over the roof, so I guess it really needed it. Good job, though, and nice fast response to the problem. 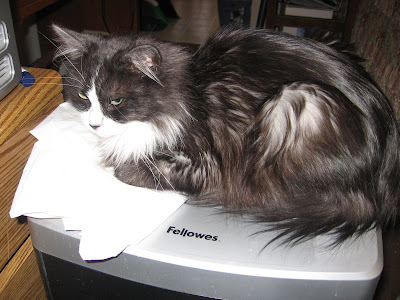 Simon says he doesn't think I want to shred stuff. I've already taken out five bags of shredding--do I really want to do more? When I could be petting a cute little cat?

Hi-Hi has the same idea. He likes to be near me--today he's "warming" the tubs of kitty litter. Isn't he decorative? He had a "needy" night which meant I didn't get much sleep--sigh. It was also one of those nights when the house didn't cool off so I had to run the fan all night so I could sleep. 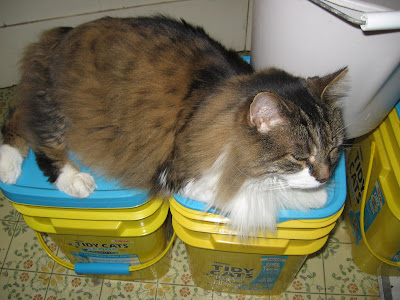 Have I mentioned lately I don't like hot weather? It's been over 95 today. 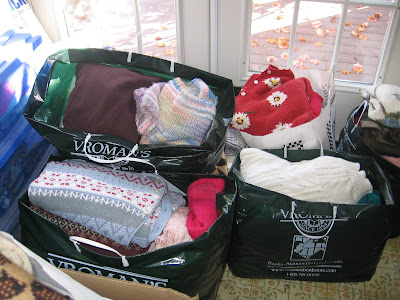 Another reason there's very little knitting content in this post. We've been going through stuff. Bye-bye, beloved '80s sweaters. And all those turtlenecks I can't wear any more (too warm). And D4 is even getting rid of some of the clothes she wore in grade school. Did I mention she is well past high school? 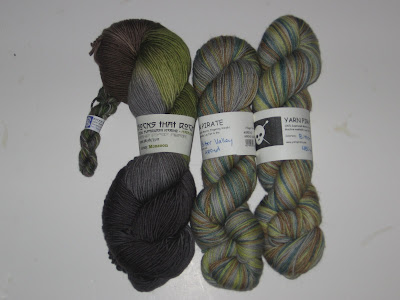 Okay, here's the yarny goodness for today. Since the Harlot posted her STR, I guess it's safe to do mine. Also, there's the Yarn Pirate Bitter Valley that came to me courtesy of Seattle Marie. Yummy--very nice. Of course, mine will not be socks. No, it won't. Maybe a shawl, or a scarf or two, but not socks. I know, I might get drummed out of the STR club if it ever gets out... Now all I need to do is keep on clearing out stuff, until I have a flat spot to set up the swift and ball winder. That means, back to the shredder. After I evict Simon!
Posted by mehitabel at 4:34 PM 8 comments: