I'm just the latest joiner on this, I'm sure, but it is rather intriguing. Check out this person's blog to see what I'm talking about. As I say, it's an interesting experiment and I've still got enough academic curiosity to want to see what happens. And yes, I'm going to follow his instructions and ping Technorati. If I've done it right.

Please join me and we'll all find out how fast a meme can travel!
Posted by mehitabel at 11:36 PM 1 comment:

Since it's already late in the day, I can't say happy First, so I'll just wish you a whole month of good stuff--whatever floats your boat, whether it's error-free knitting, happy stash enhancing, fun with family and friends and all the rest of the holiday trimmings.

I'm feeling rather proud of myself tonight, and I'm hoping it won't turn out to be one of those pride-goeth-before-a-fall kind of moments. One of our LYS started a month-long sale today, 30% off yarn and needlepoint canvases. Naturally I had to stop off, since I'd had a couple of personal invites--a hot pink postcard from Alison, the owner, and a note from Larry. I've been wanting to meet him, but today wasn't the day: he had been cornered by a customer who was wanting help with her cast-on.

But I digress. I'm really proud that I was able to walk into that paradise of wonderful yarns, and beautifully hand-painted canvases, and walk out with--nothing. That's right, nothing. There was one canvas that really was calling to me, but realistically? I don't think I would get to it. I may go back on Monday, and if it's still there, it might come home with me.

But no new yarn! Did you feel the tremors??
Posted by mehitabel at 9:44 PM 6 comments:

He's hoping your Thanksgiving was as great as his was! 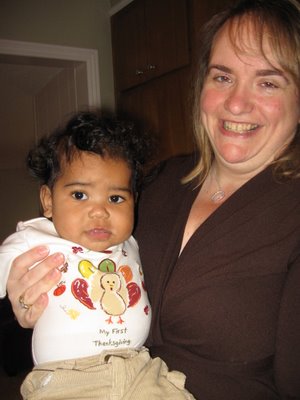 Lots of hugs and loves from aunties, cousins, uncles, grandma, friends. A big ol' family gathering, complete with big ol' turkey and all the trimmings.

Garrett got a taste of whipped cream. Just a taste. His doctor hasn't put him on "food" yet.

So this year we were thankful for many things, including this newest addition to the family. D1 and her family made the trek out from Colorado, which added extra fun to the mix.

Not too much knitting content today, sad to say, as all I've done is work on one or the other of the Lady E's. I do have a project with a deadline, though: a square for the NETA charity-raffle afghan. A 12" square in a rusty brown--I'm going to practice a little for gauge tonight, although since it's wool (Paton's Classic Wool) it will be block-able to the right size if it's a stitch or two off either way.

I'm being a pretty bad Lacevember person, too. I've got the Hanging Garden going, but so far am only 6 rows into the pattern. I think I might have to resurrect Birch, since she's also lace, and work on her instead. I don't know what it is about the HG--it's a pretty pattern, not complicated, nice yarn, using my KP Options needles, but I'm just not feelin' it.

Maybe I'm coming down with something. I certainly hope not--with a job in retail, I'm certainly needed at work and also exposed to all sorts of "stuff" floating around.

I've made a classic "me" decision for this year--I'm not making any of my gifts. None. Zero. Zippo. Nada. Rien. Pas du tout. Now, I've made this kind of decision before, with rather laughable results as I'm sitting up late finishing stuff, but I think this year I can say it and mean it. With Christmas and New Year's Day both falling on Mondays this year (and, yes, D3's birthday, which is Jan. 8 and the completion of our holiday marathon) there will be some extra weekend time to get ready. D3 is hosting the family celebration this year, since she feels strongly (and I agree) that the Carrot should have his first Christmas in his own home.

Anyway, I'm currently thinking that this will be a year for books, gift certificates, and my old standby, magazine subscriptions. Do watch this space for meltdowns, though, as my mood and inclinations change!
Posted by mehitabel at 11:31 AM 4 comments: