Today is one of those days when Blogger doesn't want to play nice with the laptop, so we will leave these pictures the way Blogger wants them. Whatever Blogger wants... etc. 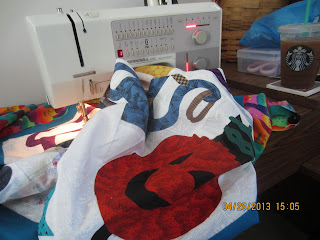 Back to working on the cat quilt. I keep trying to make the 12 blocks into some kind of calendar, but it doesn't work. I guess they are just 12 random cats doing very un-cat-like pastimes!

The basic cat for each block is pieced and then has various accoutrements appliqued onto them. When I put it away, all the pieces had been ironed on--and there they are.

I've considered different ways of anchoring the cutouts down, including--not doing anything to them. 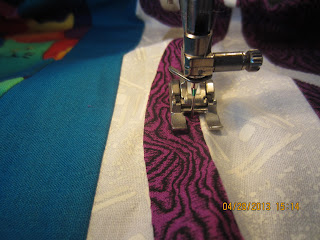 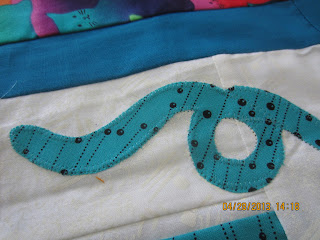 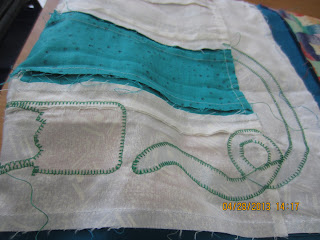 Another possibility would be to anchor them down while quilting, but for several reasons that didn't appeal to me. I'm not sure if this is meant to be a wall piece, or a lap quilt, and for durability as well as aesthetic appeal, I think having the raw edges finished before quilting is the way to go.

Using a narrow satin stitch (some of these pieces aren't even 1/4" wide) in all the different colors would be a daunting task, as well as require a degree of skill and patience I'm not quite sure I possess these days.

A buttonhole stitch along the edge of the appliques is a good way to hold them down. Black thread is traditional--but this quilt is anything but traditional, so invisible nylon Wonder Thread (YLI) it is.

Tested it out on the turquoise tail first (say that three times fast!) and was pleased with the result. You can see the front and back views in the two bottom pictures--yes, I used the green thread that was already in the bobbin for my test. Figured if I hated it and had to take it out, I'd rather pick out green that I can see! You can probably tell from the front view that it doesn't show.

The green bobbin ran out just as I finished up the trick-or-treat bag. The machine got a good cleaning and oiling, and a big fat bobbin full of cream-colored thread.

I'm pleased to report that, while yesterday I felt like a total klutzy newbie at this, my old muscle memory is returning and I haven't had any trouble making it around all those tight little curves. I'm sure it also helps that I ditched the prescription NSAID and went back to my beloved Advil. Yeah. Within the first hour after taking the Advil, the pain level was markedly less, and my movements are much less jerky. I gave it a good try--but I'm glad the trial period is over.

So, back to the sewing machine. I have 10 more cats to stitch down!
Posted by mehitabel at 4:43 PM No comments: 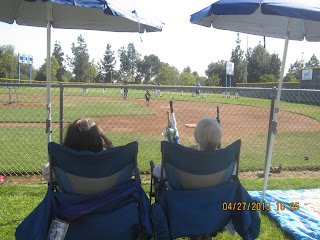 For all of my griping and complaining about living in SoCal, as much as I miss real seasons and rain and snow and foggy days and "real" spring and fall, there is a big reason why I stay put.

Family, plain and simple. Days like this remind me of how privileged I am to be able to be here and be part of all this.

So--baseball, or at least the variety of it played by 5 and 6 year olds! N8 and G are on the same team this year. For a change, G is not the biggest kid on the team, although N8 is the smallest. Apparently the next-smallest has had a growth spurt, because they were even at the start of the season. 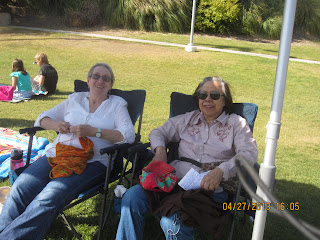 So here you have two views of the "grannies at the game," aka Lola and Memere. Lola (real name: Aida) is spending Ferdi's birthday weekend with them. She's always fun to spend time with--she's a spunky, funny, warm lady with a wealth of stories to tell. She's a (retired) RD (dietitian) and, in one of those weird twists that fate likes to send us, she was widowed just a few months after I was.

That is a Parrothead Club hat on her lap. Apparently we are both Buffett fans!

The boys' game ended in a tie, their first of the season. At this level, they use a pitching machine operated by one of the coaches, instead of a T, and in lieu of the kids actually pitching. A good compromise, in my opinion. The kids get a good workout throwing the ball around when they are fielding. Time to develop pitching skills when their shoulders are stronger and can take the stress. 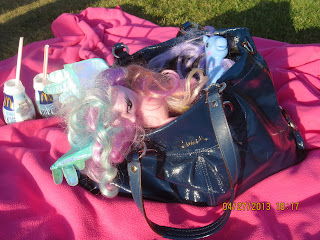 I had to take a picture of Courtney's purse. It's a lovely dark blue Coach and looks quite elegant.

Except when it's brimming over with ponies. You can also tell that this is the family with two daughters by the color of the blanket! 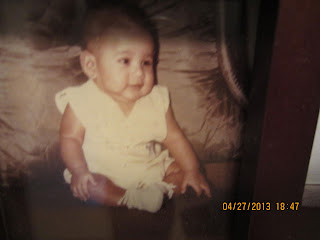 Bootlegged picture of the birthday boy!

Ferdi was a cute baby and even then he had those cute little cheeks that you want to either pinch or bite.

I posted it to FaceBook and he and his mom were baffled as to how I got it. And no, Caitlin did NOT email it to me!

After the game, we went back to their house for pizza and watermelon and salad and strawberries and lemon Rice Krispy treats and chocolate cake. 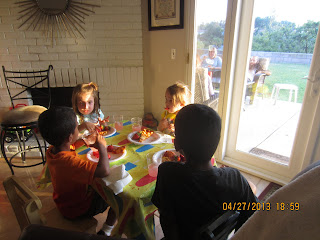 The kids' table. Two views, of course, so you can see all those adorable little faces.

All of them are growing fast and learning so much!  N8 and Audrey (both are 5) are headed to kindergarten in the fall; G will be in second grade. 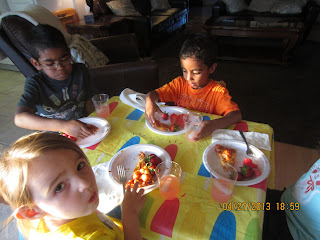 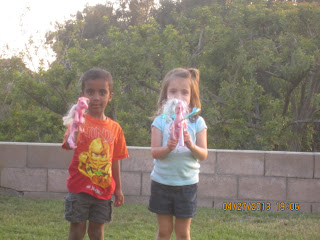 One of the nice things about having cousins of opposite genders is the opportunity to play with all sorts of things that their parents might not necessarily buy for them. Pink ponies, for instance! (And yes, I do know about Bronies, and we adults had quite a discussion about them while the kids were running around playing pony games.) 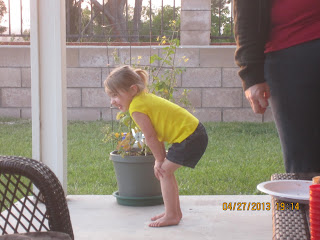 When things get a little hectic out there, sometimes a girl has to watch and wait for her opportunity to get out there and create a little havoc of her own. 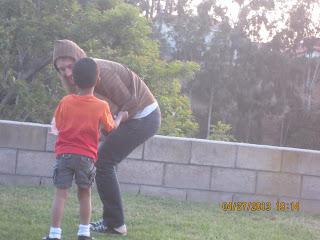 Did I mention that Big Cousin John was there too?

Not quite sure what he and N8 were plotting, but the two of them are peas in pod when it comes to mischief. 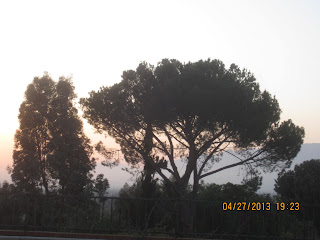 Sunset views from the back yard are pretty spectacular. 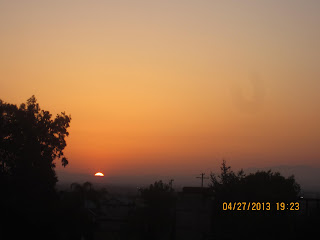 See what I mean? 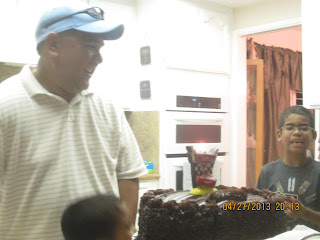 And then it was time for cake, and singing, and I really need to try to get pictures that don't wash out from the overhead lights.

The addition of more voices has not helped the family's rendition of Happy Birthday. We all suck at singing, which doesn't stop us. The only way to blot out the other voices is to sing louder... 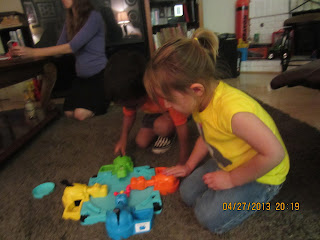 Hungry Hungry Hippos is a classic game for a reason.

N8 and Abby had a blast with it. Over behind them, there's a game of UNO going on, but I wasn't able to get a good shot of it.

(Is this a good place to confess that even though my kids all played UNO for years, I have no idea how to play? Card games have never been good to me; I had a friend who used to say, "Come play Canasta. I need to beat someone.") 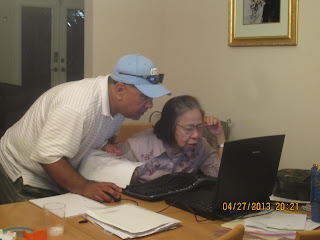 Aida is studying for her driver's license exam. She is really focused on passing, so she's working really really hard on it. This is probably how she studied for her Master's!

So Ferdi is coaching her through the online DMV practice tests, and she's taken the AARP course for "mature" drivers, and would you please all send her good thoughts and mojo and prayers so that she will pass?
Posted by mehitabel at 1:00 PM 1 comment: