When you get to feeling down, what makes a blue day better? 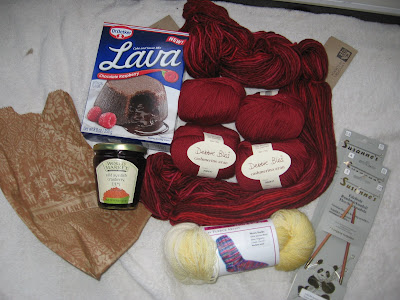 Good friends, some knitting, a little shopping...good food.
This is my haul for the day. Yes, we wound up back at Black Sheep Knittery, but first we started out at the Original Farmers Market in Los Angeles. Ellen Bloom had invited us--Sknitty, the Knit Devil, and I were the only ones who could make it this time--to join the WeHo SnBers for their monthly Saturday knitfest.
Knitting is hungry work. (Of course talking isn't!) 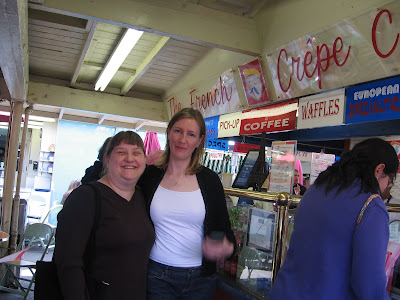 The French Crepe Cafe was chosen as a way to get me ready for the upcoming Tour de France next month. 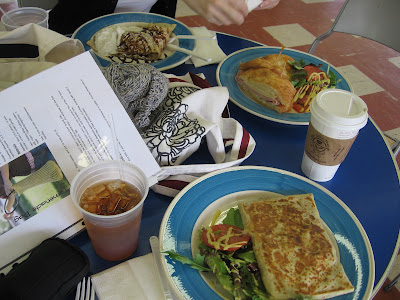 Yummm!!! Good food, knitting... coffee. Nirvana?
So we knitted. We ate. We talked. We met up again with Blogless Zoe and met some new friends. Ellen is a gracious and charming hostess and crochets up a storm!
Then we had to stop in at the local World Market to see what loverly imports they might have to tempt us. I did not realize it was the beginning of a theme.
Perhaps the Swedish Cranberry jam was a sign, as was the Chocolate Raspberry Lava Cupcake mix.
Because then, we just HAD to go back to Black Sheep Knittery, since they had extended their 50% off sale. And it's so close.
Well, close in LA terms. As in, you don't have to take sixteen freeways to get there.
Once there, I found myself attacked--attacked! I say!--by that red Manos. It literally launched itself off the peg and into my arms. Well, I did need to stretch and reach for the last 2 skeins on the tippy-top-row, but it was definitely calling to me.
Then that dark red Cashmerino Aran came tumbling down on me. This store really has the most active yarn of any shop I've ever been in. Some of the yarn that was pelting me was totally resistible--shiny chartreuse frizzy stuff, for example--others were a little harder. The Touch Me especially. But there was only one ball of dark red. So it had to stay there. The DB C'm Aran, though--it's sooo soft and pretty and such a nice shade of red. And red has definitely been the color of the day.
That lonely skein of pale shaded yellows? It's Fleece Artist s**k yarn, and it was waiting for me. I had fondled it and then resolutely put it back the last time I was there. This time, when it jumped out and landed in my arms, what could I do?
Hey, I resisted the kittens and adoptable cats at the Farmers Market. (Only by not looking at them, but still. No cats followed me home.) So a nice little skein of beautiful soft yarn? Good compromise.
To finish it off? Rosewood needles! (More red. It was a theme of the day!)
Sorry I have so few pics of our adventures. Both Sknitty and KD took a bunch and I'm hopeful that they will share on their blogs.
Now some hometown stuff, cause we talked a lot today about home towns and community stuff. This might even make my kids a little nostalgic...
Temple City is known for its Camellia Festival and Parade. Why, even Charles Phoenix has noticed it. 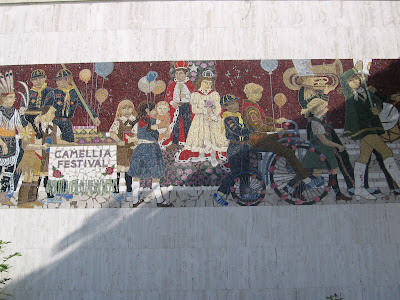 This mural is a mosaic on the former Home Savings Bank building, on Las Tunas, and it does a good job of capturing the spirit of the parade. Every kid in town marches in this parade, and since it's a competition parade for the high school and junior high bands, there's usually a lot of good music too.
Do check out Charles' slide and his write-up, ok? One of my earlier memories goes back to when we had our family's first TV set, and a lot of the programming was black-and-white "news" features. One that I remembered was about the Camellia Parade. Imagine this little Massachusetts girl, snowed in and chilly in February, looking at images of kids walking in short-sleeved shirts with floats covered in flowers! Awesome, not? Who'd have thought that I would grow up and have kids who would march in this same parade, and that I too would have the joy of scrubbing glue off their hands and clothes after they'd worked on their floats??
Posted by mehitabel at 5:50 PM 10 comments: 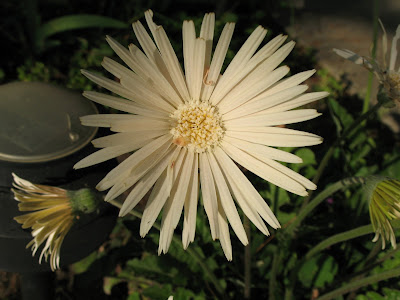 What is more "yellow" than California poppies? Not much! These are growing in Pacific Grove, in a bed outside the Historical Society. 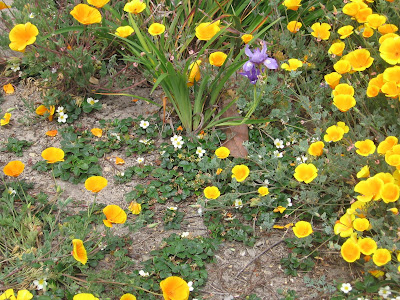 They have a whole garden of native plants. I wish the little strawberries had shown up better--but I wanted to get the iris and the poppies in too.
The Carrot was very obliging about wearing his Pea Pod sweater. 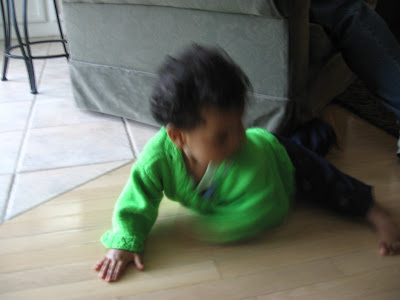 After all, it's green, so appropriate for PS, right?
Unfortunately, holding still for the camera was not part of the deal. He's 10 months old now and this is what he mostly looks like--a little blur of motion! 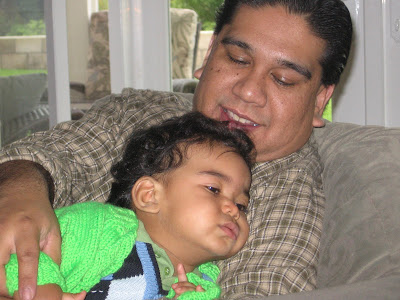 Well, his daddy can corral him for a few minutes. He's still got a size advantage. 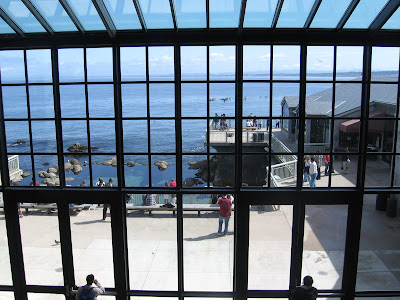 Aren't they adorable?
This is a view from the walkway of the Monterey Bay Aquarium, looking out into the Bay.
Followed by another view, from a slightly different angle.
Then you turn your head and you're face to face with a happy grinning face. I think she's grinning cause she's just spotted lunch, on the hoof! 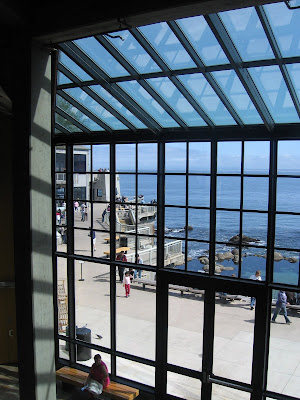 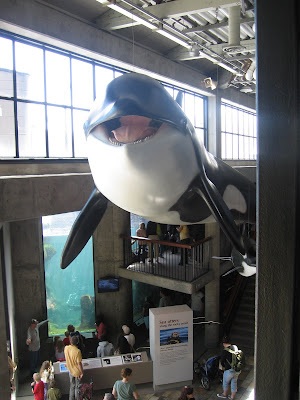 Have I mentioned lately that I love this aquarium? We had a great time visiting. I was in Monterey/Pacific Grove for a very quick trip--up on Friday, home on Saturday--for an important meeting. My sister-in-law was my traveling companion--I think we're going to be very compatible fellow-tourists (or should I say, touristes?) on our trip next month.
There was some knitting involved, and a quick trip into Back Porch Fabrics, but there wasn't time to hit the yarn shop on this trip.
I'm sure I'll be getting back up that way, though, because I really have fallen in love with the town and the whole ambience up there. Yes, we did cruise through Asilomar, just so she could see it. (Both of our husbands did a good part of their Army training and service at Fort Ord, which gave them a different perspective on the area!)
Posted by mehitabel at 11:15 PM 7 comments: